Day 37: All In Buttercups

DO NOT SCROLL DOWN!

Did you stop? Phew. Just wanted to warn you first that my l.e.g.s's are hanging out and I didn't want any coronary repurcussions. Forewarned is forearmed and all that. Take a disprin, let the blood thin and them maybe reconsider if you want to. Or not. You could just go over to this blog instead: The Sartorialist. It's classy. I am not sure classy is what you find at home here at Fur Earwig. We were discussing it today. Do you think what I do falls into 'fashion' or 'costume'? What is fashion? I suppose that is the curly question. Is it what everyone wears, or what those in the 'know' believe everyone should wear? It is large and global and a selling machine, or is it individual style and choice? Can you be fashionable if you look completely different from anyone else? What constitutes the line between interesting and odd? I have always considered myself so far behind in the fashion timeline that I am in front, but a little too far in front for people to realise I am trendsetting. Or, just out-of-fashion maybe. We (my more stylish and funky buddies and far-fashion-foward me) coined the term Fringe-Cool for ourselves. Just 'coz everyone likes a term. Well not everyone but I like words and B——likes records management. It is the cool you are on the borders of what is deemed both 'in' and 'alternative'. Or, just out-of-fashion maybe. Age is probably the best thing that could happen to you in regards to fashion. Firstly, you have more styling eras to co-ordinate. Secondly, other people stop paying any attention anyway. Third, and at the right age, they'll just think you have gone loopy and you can do whatever makes you happy. Even get your l.e.g.s's out on a full beach for a photoshoot of your new Buttercup bathing suit! 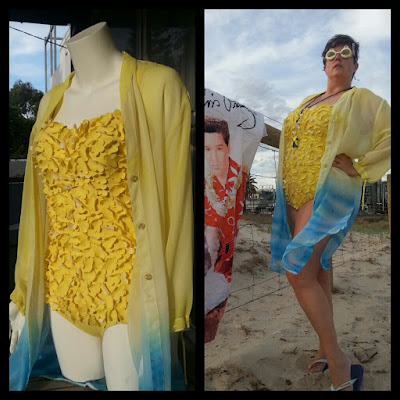 Irene               List_Addict
I promised a while ago to tell you about my bathing suit postal disaster. This suit and the one featured in She Wore Blue Velvet, or Denim came from the lovely ladies over at Sirens Swimwear. I couldn't decide which pair to buy. One day, I realised they were having a fifty percent off sale. Whoo hoo! Problem solved. I bought two pairs. The only delivery option was a one-dayer. When they hadn't turned up five days later I thought I would pop out an email and test the waters. Apparently they had been delievered one day later as promised. But they were nowhere. A pile of Australia Post red-tape later, the sweetly singing sirens at Sirens kindly sent me a new pair (of pairs). I felt awful but they really weren't anywhere to be found. Absolute unfounded theory follows: I am not in anyway saying that this is what happened, but it just seems oddly co-incidental (like it is oddly co-incidental that although I have 'Don't Track my Pageviews' on my computer, my pageview count goes up one number everytime I look at my page—and no, I have not looked at my own page 2011 times!) I later found out that the lovely V—— had, at about the time the parcel was due to arrive, return a misdirected parcel to a house a few doors up. I won't say who, but the calibre of people can be described. I'll keep it short as those who know me know the full extent to which I can rant about this. These people won at VCAT. Against council, and against community. They won the ability to put up a three storey monster on a block of Victorian Miner's cottages. They were advised to put up opaque glass to shield the neighbours, and have since replaced it with clear. These are people, I think, who would have no qualms in keeping a maybe similarly misdirected parcel rather than walking a couple of doors down to it's rightful owner. Like I said. Unfounded, unproven, possibly grounded, but until I see them at the beach, there is probably not much more I can do. And they were conveniently never there the few times V—— knocked. Hmmm. 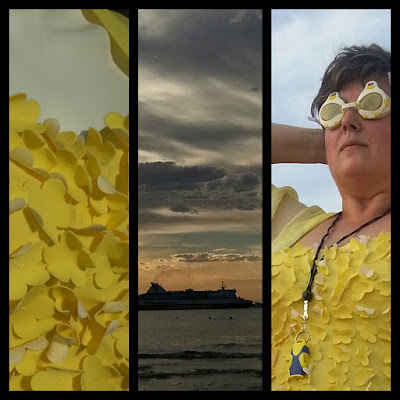