I may not be the easiest person to go on holiday with. Personally I think that most other people are not easy to go on holiday with, or be in a room with, or on a planet. Often, when the issue seems to be everybody else, in actuality it is most likely to be you. I may, in fact, be the most incomprehensible, difficult and complex person to be around since Lollii. I've told you this before: I need isolation. When I worked for a ra-ra-ra company that liked to incentivise its employees with analyses of their personality types and comparisons of their selling goals to climbing Mt Everest after losing two feet and a nostril, we did a session on the Myers-Briggs Type Indicator. Exploring the first aspect of personality on this test (introvert versus extrovert) they divided the room into intros and extros and got each to come up with a list of the traits they believed differentiated the other group. Surprise: I was on the introvert side of the room. They called us shy, quiet, indecisive, reclusive and weak. We believed they were brash, bullying, loud, annoying and bombastic. But the facilitator gave a different explanation. Extroverts, he said, work with action, breadth of knowledge and frequent interaction with people: they get their energy from being around people. Introverts, however, work on thought, depth of knowledge and quality interaction with people: they get their energy by being alone. My reading: people drain us of our energy; isolation replenishes it. (Reference: *eek* Wikipedia) 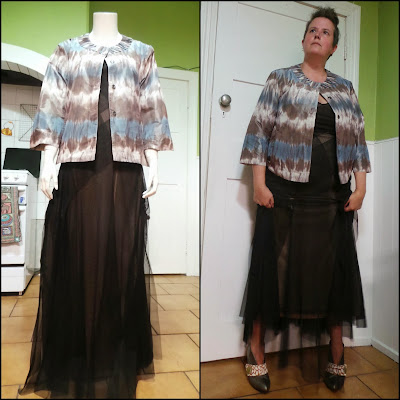 Irene               List_Addict
There is not a lot of isolation to be had on a three week holiday with a nearest and dearest. I did quite well this trip. Yes there were tense moments. Okay, there were some irrational moments too. Some angry moments. Some 'don't talk to me right now' moments. What? Other people are hard work. They say things. And do them. And they leave things lying around. But three weeks is good. Three weeks, no major breakdown: excellent. Well, except for the last day. This day. When I did something I have never done in my almost five year long relationship with the boy—we had a shouting match in public. 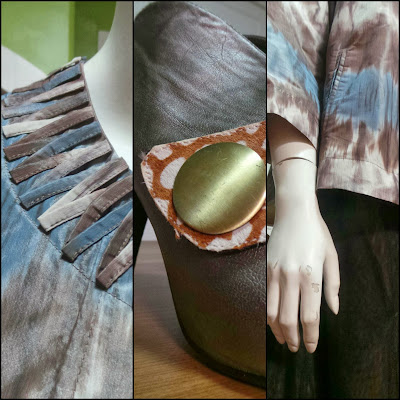 The morning started fabulously with excessive amounts of pancake for our last American indulgence. A stack is already enormous, but the server also brought a complimentary hot, sticky pumpkin loaf with oodles of butter. And then we headed out to Six Flags Magic Mountain. Because he watches You-Tube videos of them, searching the 'scariest' and 'craziest' and 'highest', I got the feeling that, despite nervousness, the boy actually wanted to be there, doing this. But we walked around for ages and didn't go on a single ride. I started getting antsy. Our time was limited. We started to discuss. He told me he wasn't really keen, didn't like the idea. And then he made the fatal error of saying the following sentence: I'm doing this for you. It is one of those key sentences that highlight the incompatability of males and females and the reasons why, in the old day, all the gals hung together and gathered, and all the boys went off and testosteroned. Let me give you boys some advice. If you don't want to do something, say so. We so often make all the decisions bececause you guys are indecisive, you so often let us because you think it keeps the peace. But, if you go that way, if you choose 'peace' over your own personal truth, then choose that silently and never, ever, try to make it seem like you are the good guy, the martyr, the giver. You'll just p@** us off! Decisions take time and thought and effort. And even though you may not remember (possibly because you weren't really listening), you were consulted for your opinion, and you gave it. Stick to it!

Whoo. I didn't realise that was in there. Like a clearing shower though, a nice yelling session in public got us into queues and on rides and the rest of the day was lovingly spent hanging upside down at speed. But I was done. Crankiness settled in and stayed for the whole flight home. Even on the sky couch. In a couple of months time we are heading off for another holiday: walking through the UK countryside. We are going for five weeks. Wish V—— luck! 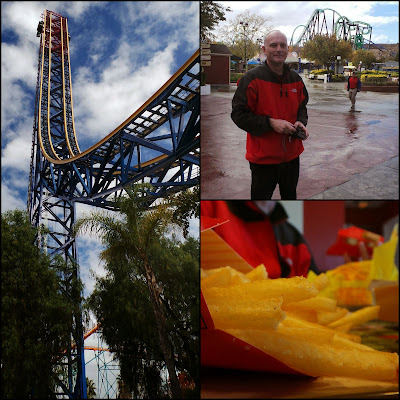 Clockwise from left: Six Flags Magic Mountain—a for-example; What thinking 'I should have said something earlier' looks like; Goodbye American food
The Outfit
Dress: Retail, Can't recall where
Jacket: Thrifted, Las Vegas, Nevada
Shoes: Op-shopped (yes, I am venturing in that direction! Eek!) 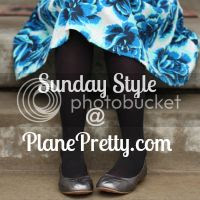