Even though I am (undeniably, but denied anyway) getting older, I have rarely had funerals to attend. It's a good complaint. I am sure the statistics will change. Maybe it is part of what makes me able to get through a work day without loosing all my faith in the human race, but I feel like I have an almost Monty Python/absurdist relationship with death. I'm not afraid, I'm not regretful. The sadness of death is always sadness for the ones who don't experience it, for the ones, instead, who witness it. We recently lost a gentleman from work. The funeral was this week. At the service someone said that he was nicknamed 'Grumpy'. I must have been lucky because I never thought he was. To me he was always cheerful despite what was a life-long battle with disease, mostly acute diabetes. He was quirky, conversational, interesting and curious. He was patient and kind. He worked so hard in our stressful, highly-paced, responsibility-ridden positions in a way that I found respectful and professional—not everybody does. I didn't work in the same area as he did often, so maybe this isn't everyone's experience; it was mine. And not always working in the same area meant that I had a higher chance of being on the same breaks as he. And breaks are where you get a better chance to talk to people. He fell ill before we got back from holidays and so the space between his being there and his not, in my life, seems much larger. For others it is one day to the next. But under everything, for me, one feeling I have—and let me explain before you judge—is relief. Living is hard work. And that is before anything like the sort of thing that our friend lived with: constant, lifestyle-affecting illness, operations and medications, dialysis numerous times a week that required sleeping overnight on the machines in the hospital. He suffered a heart attack a week before he passed and they werent sure how long he was away before they brought him back, not sure how much damage there was. It's over R——. No more pain, no more worrying, no more suffering. Maybe not even awareness. Peace. For everyone here worry, pain, suffering and awareness still persist, in an increased way for many, as the days remain close to his passing, but for him, not. To me, that is a relief. R.I.P. 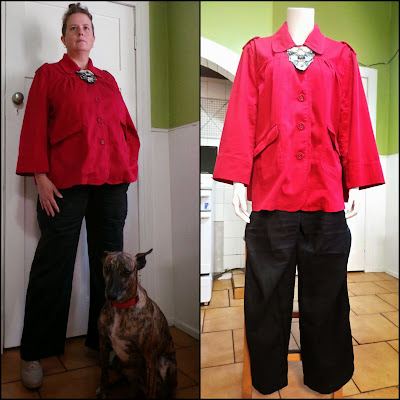 List_Addict               Irene
The service did make me think about what I would like to happen for my own funeral. This is where the absurdist level will kick in for sure: don't read on if you take death seriously. I just can't. If When If I die, anyone roped into being involved in the after effects can take this current post, made this day, in lieu of all past, and up and until any such later-dated changes, to be the last and final requests for my last rites. Firstly, you can resuscitate. But only if I am coming back the way I was when I went, or more quirky. Don't leave me on machines unless the same outcome is guaranteed either. Unplug. Give away every single useful organ. I'll try and organise it, because space is of a premium, but I would rather be buried, not burnt. I want the big stone gesture, the return to the earth. If it is a real issue getting space, then eaten by birds is my second choice. Make my chapel a tiny, tiny one. I would never fill the room like R—— did, but if the room is tiny, it may seem the same. The thing I am having the most difficulty with though, is the music. Song lyrics seem so much more poignant at funerals. It makes me wonder who chooses them. Are there good funeral songs? Do writers know that when they pen them? Can you choose our own funeral songs when, really, and once again, the funeral is for those left behind? What would you want your funeral song to say about you? I have spent the last twenty minutes going through the songs on my i-pod. My funeral curator would not need to search further. But they would need to be discerning: 'Big Socks', 'The Tennessee Bird Walk' and 'Dumb Ways to Die' are all favourites, but totally unsuitable. If I knew me they way I do, which nobody really does, the song most likely to make me cry at my own funeral would be 'The Wind Knows my Name'. 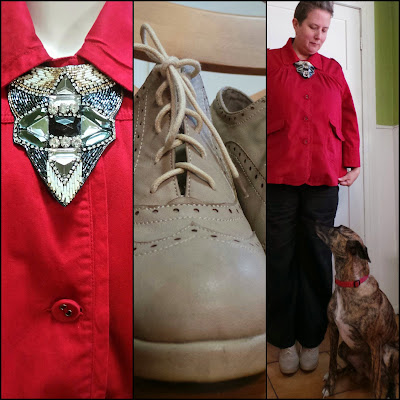 The Outfit
Clearing the Closet: It’s time to go red swing jacket that takes too much ironing for too little return and pants which are worn through in some seriously embarrassing areas
Jacket: Op-shopped
Pants: Primark
Necklace: Retail
Shoes: Op-shopped 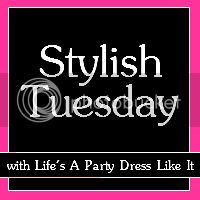