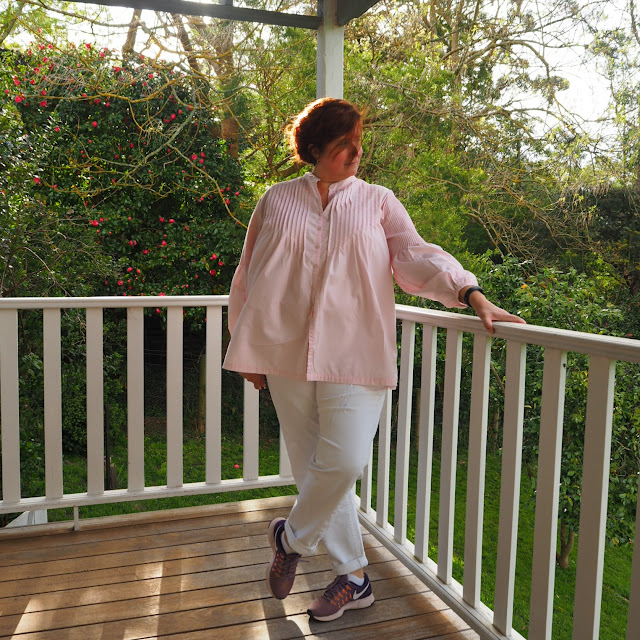 Less-is-More
When I was the bravest spider-hunter in the house, I would be the one with the kiddie's bug catcher, trying to trap the little buggers, and move them to places far from home. (Aside: remind me to tell you, another time, about the tiger slug.) I would be the one trying to convince myself that braver spider-hunters than me would just pick the thing up and transport it with their bare hands, and as the bravest spider-hunter in the house I should be doing that too—until it walked across my hand half-way through the kitchen and then all semblance of bravery disappeared, and all semblance of fear-on-two-legs took over. 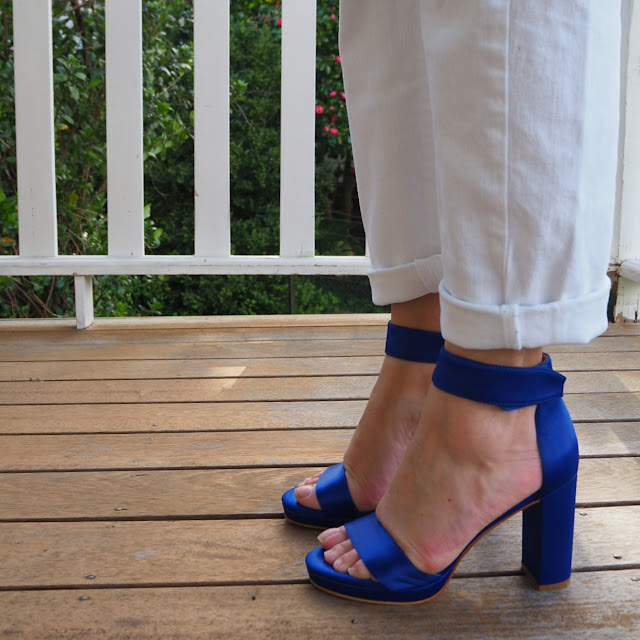 So when I was sitting on the couch after a late-night Pokemon hunt recently, and Mr Earwig was sitting close by and the look of spider-hunting-ness entered his eyes with a direct focus on my skirt regions; and given that the move to Earwig House with said Mr Earwig meant that he became the bravest spider-hunter and I became the screaming maiden, or manden as appropriate, I was well within my new role to leap from the couch, screaming—as required—and ripping clothing off in mid-air pounce. This does make it very difficult, I understand, having been the bravest spider-hunter in the past, to locate said spider. 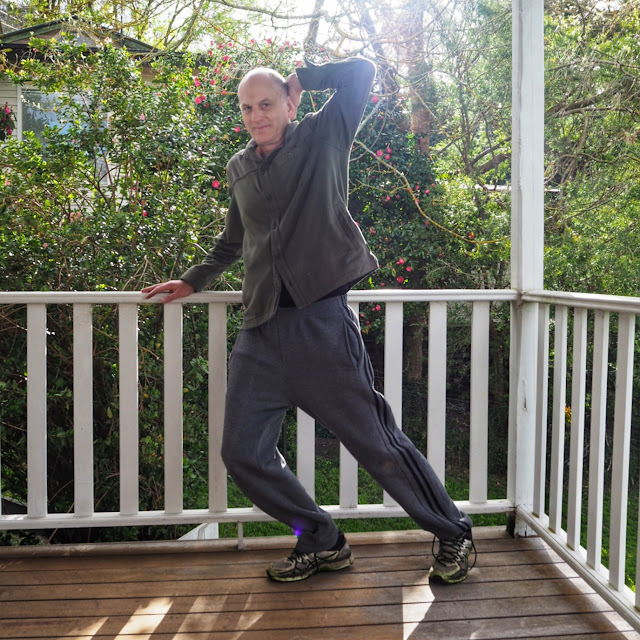 Said New Spider-Hunter helping to assess light conditions in a rendition of what he thinks I do here!
Never fear though, because, near naked in the part of my lounge room that offered the largest 360 view of anywhere-it-could-be, I managed to locate it by stepping on it. Screams recommenced. I do give credit where credit is due for spider-hunters who must hunt with bleeding ears. That particular spider suffered a quick death blow from the non-shiny end of a rather large torch. Sorry to the spider-preservers, but it was a White Tail and regardless of your stand on the fact that they are no longer believed to cause necrosis, I'm all for hedging my bets on that one. Other species would be escorted from the home with banning notices issued, just so you know. 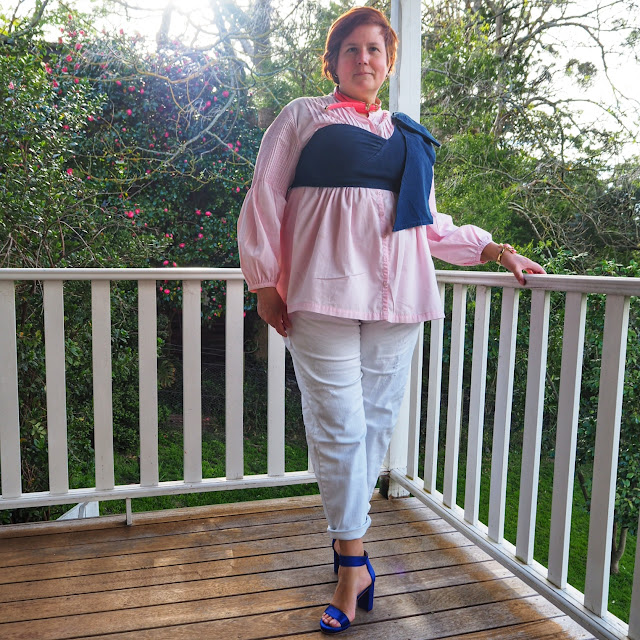 Standing in only the non-spider harbouring clothing essentials in my lounge room while mop-up procedures commenced, I thought back to the outfit at the beginning of this post and pondered the whole less-is-more, more-is-more debate. 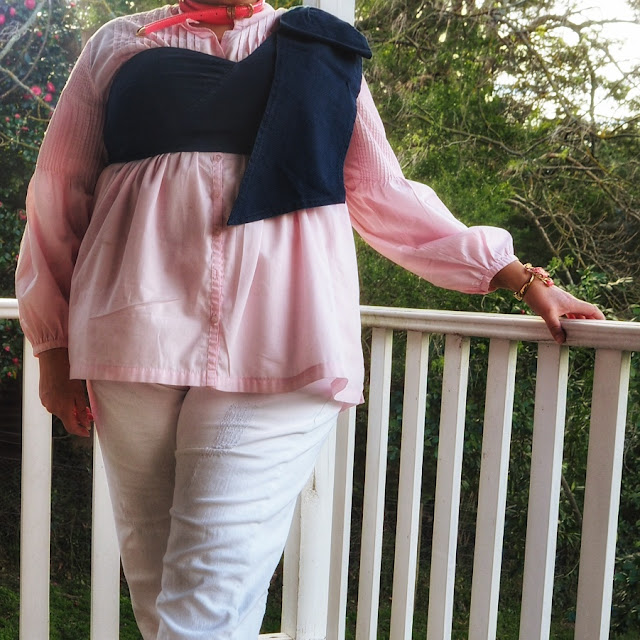 I'm not a social animal. I don't do parties, events or gatherings; no festivals, parades or shin-digs. Hence the only place I really wear outfits, for the most part, is work on non-uniform days. (I love non-uniform days.) But its a hard crowd to work, at work. There are detractors for when I wear things that don't conform to the norm, there are detractors for when I do. When I wore the first outfit on this post, the overwhelming reaction was 'Boring!'. Even the people who usually come up with epitaphs for my outfits—'harlequin, bedouin, mannequin, women-o'-sin—found me dull. You can't win. 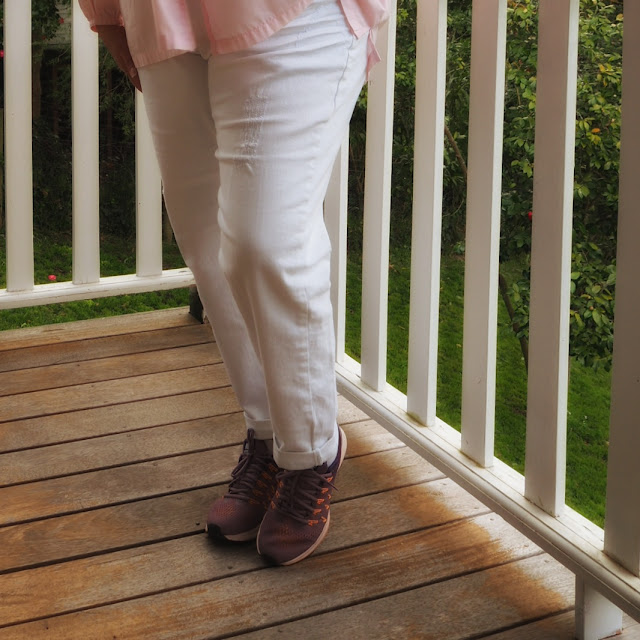 So this shoot was to make the dull un-dull. I added, to my thrifted and pin tucked pink shirt and white Target jeans, a belt-as-necklace (origin? Myers? Primark? Somewhere in-between?), an ASOS denim crop top and a pair of satin heels from Jeffrey Campbell. If I had worn this: 1) While at work, I would have been considered outrageous, and 2) While trying to rid myself of spider-lurkers, I would been fighting the slow death of my skin from spider bite. The less-is-more, more-is-more debate is harder to sort than I thought. 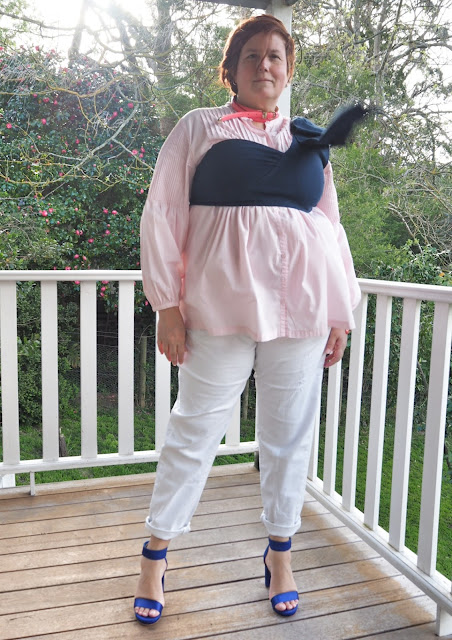 More-is-More
Photographs shot by Mr Earwig
And shared where people can be whoever they are:
Patti at Not Dead Yet Style’s Visible Monday
Catherine at Not Dressed as Lamb’s #iwillwearwhatilike
Cherie at Style Nudge’s Shoe And Tell
Labels: ASOS Jeffrey Campbell less-is-more more-is-more Nike op shop spider-hunter spiders Target thrifted