I was wondering what to talk about and realised that in blogland it's Monday (real-land is a different thing) and so I can tell you all about my diet/fasting progress. It is 'stalemate' rather than 'progress'. I'm still at four down, twenty-one to go. The fasting goes mediumly well. In the two weeks I have missed since we talked 5:2 Fast Diets, I have had a two-days-in-a-row-er where I cracked in the middle and had real coffee with milk and sugar and a biscuit; and; a split days option which went okay. For those who are joining me for the first time I am following Dr Michael Mosley and Mimi Spencer's The Fast Diet which is meant to work on the fabulously simple premise of: 'eat what you want (within reason) for five days a week, and fast on a quarter of your calories a day for two' (works out at five hundred for women, six hundred for men, which in turn implies allowing two thousand calories on normal days, which is often enough for cake). Its benefits, for me, are purely, or at least mostly, psychological. Yes, I am not so happy when fasting day comes around. And I think about food a lot on those days. I think about coffee with milk and sugar even more. But it's only for two days, and then coffee is back on, and it's days before it all happens again. My problem is that I don't eat very well at all on the other days, and my calories may come almost too exclusively from chocolate biscuits. If I could get that a little bit better, cook the occasional meal, get back to boxing or walking all the way to work, limit the amount of biscuits that come into the house—not saying you can't have them, but actually get out and about to get them, maybe after a bit of a walk—then it may work even better. There, I made a decision and took an action to try and make this work better. I have added My Fitness Pal to my apps and I'm going to keep track of what I eat. Knowledge is power. I think I'll find, chocolate biscuits aside, that I don't actually eat enough on off days and then I will hopefully take positive step number two and buy some good stuff to eat for my pantry and fridge. Then I'll be able to break into those boxes of as yet un-worn and un-showcased op/thrift shop/store clothes just waiting for my skinnierness to emerge. Whoo hoo. I feel good. (Until I realise I am kidding myself.) 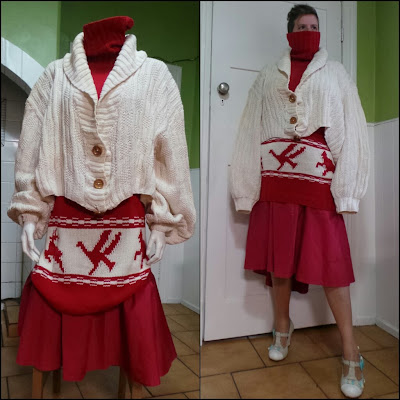 Irene               List_Addict
Today starts a two week exposé of the season we like to call S/S 2013 but is more popularly known, at this time of the year due to the implied heavier influence of the more populated Northern Hemisphere, as A/W 2013. Alternatively put, I am stealing ideas of haute couture fashion from the magazines the boy bought me a couple of weeks ago and adapting them to the items I have in my closet and using that as an excuse to dress outrageously and pose sillily (more sillily) for two weeks. Starting today. Today's outfit is partly imaginary and partly inspired by Vivienne Westwood (which is probably the same thing really). It features layered woollens, sleeves too long for your hands, red, turtlenecks, and layers that alter the percieved shape of the body. It's a fairly loose intrepretation, but overall on A/W 2013, there seems to be lots of red, lots of texture, of wearing of a colour top to tail, of layering, and lots of changing profiles. And if I could choose one outfit from Vivienne's collection for my very own? It would be this one. 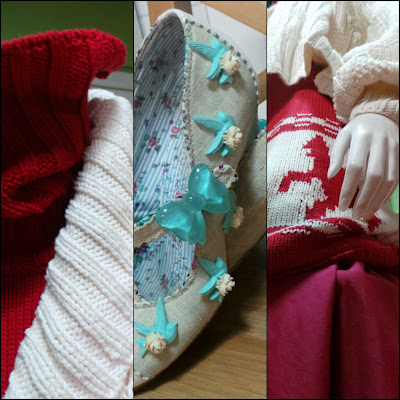