Apologies for sporadic posting. Free wifi has been impossible to get and paid wifi exorbitant. We have hired a GPS now that allows five devices to be added to it as a portable wifi hotspot. I don't understand either, but seems to be working so far.

There are no more sleeps. It seemed we had booked so far in advance that the day would never come. Like it was an illusion, but come it did. I write to you from Auckland, New Zealand, where the departure board, next to our onward flight reads 'Relax', because it's a fair while before it will be assigned a gate. I just experienced two completely new things: an exit row seat and a movie-less international flight. We paid a little extra for the first privilege—I think it was about forty dollars. What do you gain? Extra leg room and the awkward honour of staring straight at the stewards when you take off and land. Also the exciting opportunity to help in an emergency. I think I will be good: I will take my responsibility seriously rather than using the seat as an excuse to jump out of the plane at the first opportunity. But I think I will be bossy and you better listen because at a time like that I will not think a smack in the back of the head, Jethro-Gibbs-style, is an inappropriate reaction to you not taking my direction. What do you lose? A window, the ability to play games as you take off (you have to stow the screen) and the harder to sleep position of being right where the gathering and talking happens. On the scales though I think the tip is towards it being money well spent for the ultimate benefit—nobody in front of you with a propensity for reclining!

The lack of movies on the other hand feels even odder. To me an international flight is an unstated challenge to cram in as many movies as temporally possible. But the twelve hours of sleep, evenly quartered over the last seventy-two hours, and the (lacklustre) selection of movies on offer combined to send me towards a napping opportunity rather than a watching one. There are thirteen more hours to go, but I have a feeling—with the impending Skycouch—that sleep will be a high priority on the next leg too. I'll let you know below how that goes. The stewardess we were facing on the last leg seemed to imply it was going to be a lot squishier that we will enjoy. 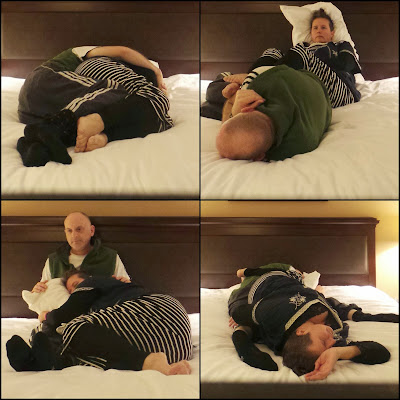 A simulation of the progressively discordant positions adopted over the course of the flight in the Skycouch, including my outfit de jour. Irene, if you are wondering is currently on route to Koh Samui for her own holiday and will be sharing photos with me tomorrow. She didn't fly with a Skycouch.
Back again. This time from the Sheraton Park in Anaheim. My eyes keep trying to crawl out of my head and go to bed by themselves. I am shattered—as is the boy. I have brought the 'Feelings Flashcards' with me—a simple way to highlight how you feel so that you don't have to communicate it to a fellow traveller in an awkward conversation. Meant for children, they are quite tame in terms of feelings (I often feel I need something stronger—like homicidal or catatonic or exhibiting the effects of a regular ice user) and so it is with a sense of the restrained that we have chosen 'tired' and 'cranky' as our respective choices. Saying that, I am in a dilemma because I don't know how I am ever going to travel internationally again without a Skycouch. It rocks! Yes, lying side by side is tight—the tight 'tight' would be if it was a feelings flashcard. But the ability to stretch out your legs, or sit cross legged or lie down in someone's lap without feeling you will fall off or end up with seat-shaped ridges over your body is priceless. As is priority boarding and never having to share with a stranger.

Air New Zealand has managed to get us here, also the man in the Prime Time shuttle bus. All holidays are essentially journeys but now that that journey is finished, the next part of the holiday can begin. Tomorrow, Disneyland!