Irene and I could not be any further apart than this moment. I'm dressed for the snow. She, if you aren't aware, was spending her holiday in Thailand, lazing on a beach, drinking cocktails and ending up sore and pink every evening, covered in aloe vera. I mean, look at her skin. Pure alabaster. She shouldn't be outside without a golf umbrella. And at least three layers of zinc. Actually, maybe that is three layers of zinc.

This day on the (now past) holiday consisted of a thrift-stop in Alamosa. The store was divided into two parts—very cheap horrible stuff, and prize-picked and over-inflated-ly priced stuff. I managed to salvage two pairs of cropped jeans (patterned pink ones which have since been described as looking like pjs, but I like them, and my first ever white pair—eek!) and then find a fantastic boxy fur jacket. The jacket was thirty dollars, but afterwards I found a thrift-shop label in the pocket which said fifty. My theory: they put a label in the pocket as a fool-safe for people who change the outer label. But no-one checked the pocket at the checkout. I was happy with the price and started wearing it straight away. I felt a little sore-thumb when we stopped in a hippy-vegan coffee shop for the morning lattes, but I soon discovered it was a fake and so I am okay with wearing it around non-fur-lovers. I would, two days later, leave this jacket in a hotel room in Santa Fe and have to call them to get it sent home. I like it. The bargain coat cost me eighty dollars to get shipped to Australia. Not such a bargain any more. I still love it, but it does look a little shabby for a one hundred and ten dollar jacket now. 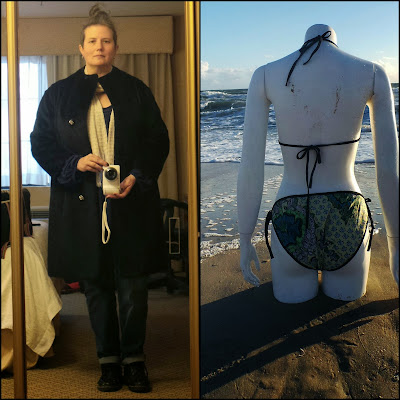 List_Addict               Irene
We stopped in Los Alamos, the secret location, for so long, of the Manhattan Project. I suppose we have to have these museums to sadness. Museums like Ground Zero, or the War Remnants Museum in Ho Chi Minh City. Museums that show us the infinite cruelty of man to man. Museums like the Bradbury Science Museum in Los Alamos, which details the history and science of the Nuclear. For much of the exhibit, there is an attempt to look at the advantages of nuclear technology, and the other work done by the labratories in the area to make life better for people (eh, questionable?), but you can't side-step the fact that they made two enormous bombs because of the minds in this area and dropped them on hundreds of thousands of civilians. People ask how else they would have stopped the war. I don't know the answer. But there appears to be reports that the Emperor of Japan was not against surrender, but rather against wholesale surrender on the Allies terms. Surely that implies some discussion could have happened without this resort. And what about the fact that the people in the know regarding nuclear weapons were not really sure what would happen if they let one go, but they did it anyway. But do you know what the worst thing about this museum was? Do you? They had all these kiddie sections with mind puzzles where you had to sit on tiny kid's chairs and get a sore back. And neither of us could do the damn things! So annoying. But seriously. Sad place.

We booked into a hotel in Santa Fe for two nights. We're having a rest day! Whoo hoo. And we spent the evening doing laundry. I love laundries. They're like waiting at airports or sitting on trains. Times when you can't do anything else but peacefully wait for the finish of the spin cycle. 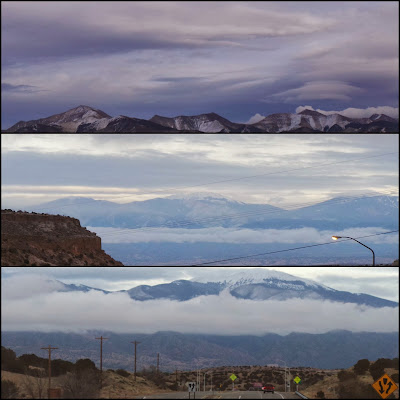 Top to Bottom: It was a cloud-watching kind of day, around Alamosa and Los Alamos
The Outfit
Top: Op-shopped (and now cleared from the closet as well)
Fake Fur Coat: Thrifted, Savers, Lubbock, Texas (not the one spoken about above, another one)
Jeans: Target
Scarf: Op-shopped
Boots: Dr Martens