Here we go! That was our guide's catch-cry whenever he finished telling us something. We heard it about forty-three times in all. The poor guy had a small tour for today's LA Highlights and Star's Homes Tacky Tour (gotta do it!). Fewer people, fewer tips for the same amount of work. And he was working with a hard audience. The other couple were Indian nationals who had been living in Pittsburg for three years. They were, to put it bluntly, blunt. They didn't seem to be listening, they came back late from everything, they went off when our guide was trying to show us things at the market, and they definitely didn't participate in any of the banter between driver and audience—that was left entirely to V—— and I. 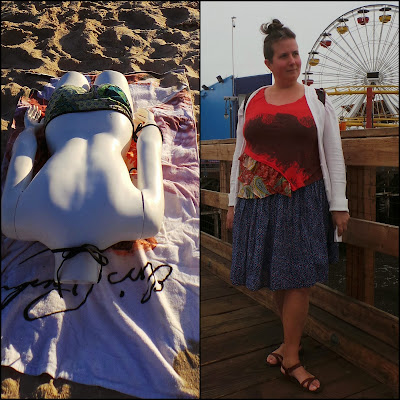 Irene               List_Addict
In bus tour parlance the longer the word is, the longer you stay in a given spot. The three words they use are see, view and visit. Keeping that in mind, this is our tour. We saw Venice beach and visited Santa Monica Pier. We then viewed UCLA. 'How did you folks enjoy UCLA?', our guide enquired. Ha? We also viewed some star's homes including J'Lo's, what used to be Nick Cage's before he lost all his money, Aaron Spelling's, Paris Hilton's parents', where the Beatles stayed when they came to town and the Playboy Mansion. Then we headed up above the Hollywood Bowl for a visit, looking out across the valley to the Hollywood sign. From there we viewed Sean Penn and Orlando Bloom's houses. There was a viewing of Rodeo Drive and Sunset Boulevard with its infamous clubs. We visited the Farmer's Market for lunch (had a really yummy meal at Maggiano's Italian restaurant). We had a visit to Grauman's Chinese Theatre, which was annoyingly closed for some Hollywood function or other, and so we didn't get to hold concrete hands with any of our favourite stars, but we did have a long walk along the stars of the Walk of Fame. We had a view of the modern Downtown area and then visited the area where LA got its start—El Pueblo and Olvera Street. The driver gave us an extra, no-added-charge view of the home of the Lakers, but by that stage everyone was spent and simply stared out the window while he tried to allow time for photos. Not a shutter to be heard. And then back out to Anaheim seeing all the highways in between. It's tiring to sit in a bus being chauffeured around the place. Hard life, I know. Dinner was all we could manage before hitting the delightful Sheraton feather pillows. 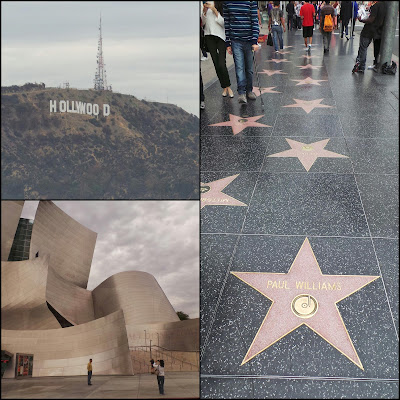