A driving holiday is not as simple a holiday as it seems. Or am I just doing it wrong? The theory is: get a car, get a map, roam around and discover amazing things, have no plan, don't drive all day. But it turns out that an infinity of options is disabling. Big picture, I think it is part of what ails us in the world—when you can be and do anything, anything at all, how on earth do you choose? How on earth do you commit? Too many options and no plan are not liberating, they are cloying. Back to small picture though, I actually got an insight into a possible answer to that question (it would be great if I could adapt that to the big picture sometime soon, as the time for deciding what I want to be when I grow up is rapidly diminishing). I handed the map over to V—— and asked him to decide the general direction we should head in the next day. I had formulated an idea of my own already but wanted to see what V—— wanted to do. The process of watching V—— try to make his own ideas made me realise how, when presented with a great unknown, we can start to make a decision anyway. Literally, and metaphorically, all you can do is look at where you are, keep a thought on where you came from (as it is rarely in your advantage to go back) and then scout around for what sounds interesting going forward, and commit to going there. You can't see everything or go everywhere, you don't know what any one decision will bring over and above any other. There is no way to know that. And so you have to take a hunch and go for it. It is profoundly simple and astonishingly difficult at the same time. On a road trip it means 'let's go to the Four Corners and then head up along the Million Dollar Highway—that sounds interesting'; in life it means 'let's apply for a PhD and spend five years writing a paper with the nagging feeling in the back of my mind that I will be too old to be seriously considered for a professorship when I am finished and so it will all have been in vain'. 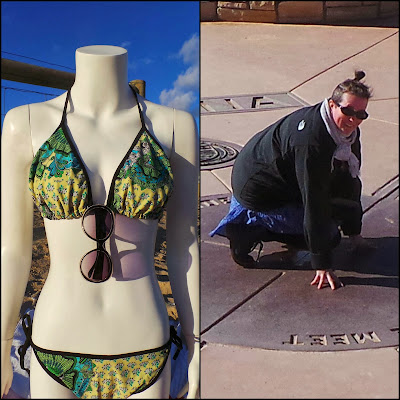 Irene               List_Addict
So we went to Four Corners. Samsung Siri confirmed it is smack bang on the point where Colorado, New Mexico, Utah and Arizona come together. We lunched and wandered in a little town called Durango. And then we got on the Million Dollar Highway and went skywards to the snow. It is called that because the soil used to build it has gold ore in it (apparently). I think I slightly misread the guide book as to which direction was the best to go on this stretch of road if you have a fear of heights. It has a distinct lack of guard railing as it twists around, at altitude, through Coloradian mountains on roads lined with ice. I thought we would be on the inside hugging the cliff. Turns out we weren't. And given we are used to driving on the left side of the road (ie. the right side of the road, ie. the correct side of the road), driving on the right (ie. the wrong side of the road) means we tend to stray rightwards a bit. This is a little daunting when all there is on the right is a thousand feet down a mountainside. Tense. But beautiful. And life-affirming. And the sun setting slowly made the mountains and the snow look like rose gold and so it really did seem like a million dollars. And we had a twinkie—what is that? We stayed the night in the gorgeous little town of Ouray where two weeks later it would be minus thirty-one overnight. V—— got very excited for me when Annie, at the Ouray Brewery, asked for my ID. Bless her, she played along and called me 'timeless', but I know she would just ask everyone because it is easier than not and missing one! 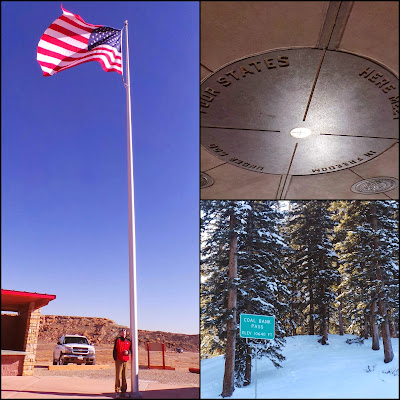