Day 74: She'll Be Coming Round the Mountain When She Comes

Oh dear. What a way to ruin a day. How did we do it when we were young? It makes you realise the elasticity and adaptability of youth. I have felt lack-lustre all day. And wisely, and with great forethought, our night of inebriation preceded a six a.m. start and a five hour driving tour which started with going through a mountain pass. Coffee and toast for breakfast, lots of water and panadol all stayed where it was put—thank goodness. It was just that we would get out at the attractions our guide Bay was showing us, have a half-hearted look around and start hoping to be back in the car very soon. And I certainly wasn't in the mood for an increase in harassment to buy stuff. Why can't people understand I do not want any more stuff. Especially when we went to climb the Marble Mountain (hot, hard work where the fact we had only had a tiny breakfast started to effect the blood-sugars), and the car was parked in a shop where the expectation is you look, and hopefully buy, because that is where your guide has brought you. I was steaming hot and couldn't even think of entering a cramped tiny, airless space to buy things made of marble that would not fit in my suitcase and would weigh a ton, literally. I imagine I came over rude. But then I think it is rude that 'no', with a smile, and a polite 'thank you' is never taken as the 'I don't want/need/covet anything' it is intended as, but rather as 'why don't you ask me over and over again until I want too cry and just end up being rude instead'. There are plenty of people who want this stuff, obviously, otherwise why would vendors persist. Go ask them. Yes, call me grumpy pants, I don't care. 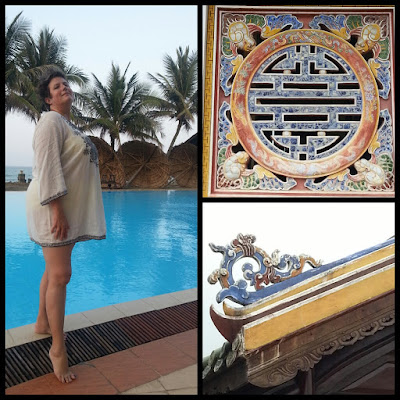 I am cheating and putting some of yesterday's pictures in with today's shoot. I forgot to charge my camera last night and so all the photos are on the inaccessible real camera rather than my phone. We have arrived in Hoi An for the beach-pool-laziness part of the holiday. I have worn this overshirt with my bathers previously, but it is nice to wear it for real. Spent the afternoon dozing off my hangover. Should be able to get into concentrated relaxation with much reading first thing tomorrow. 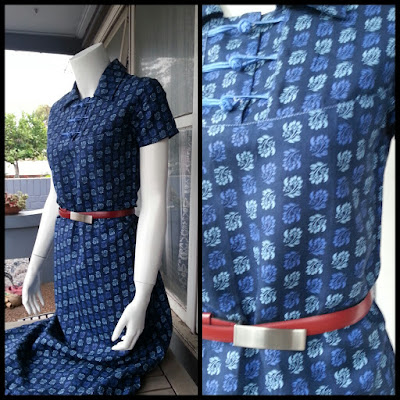 List_Addict's Outfit and Distractions
Top: Op-shopped
Bathers: Siren's Swimwear
Photos (clockwise from left): Me at the pool of the Golden Sand Resort, Hoi An; Detail of a mosaic vent or window at Hue Citadel; roof detail at Hue Citadel