Day 75: The Girl From Ipanema

Mission accomplished. Managed to spend the whole day by the pool, reading, swimming, people watching. No return to cocktails or any form of alcohol at this stage. As a result my day maybe doesn't sound that exciting, but in my imagination it was non-stop. I investigated the deaths of three infants in the flat of a 'former' prostitute in Quebec while juggling two men's affection for me; I used the grief of the death of a friend to win back the woman he had stolen from me; I photographed the last moments of the Vietnamese war with America while trying to evacuate my injured Vietnamese lover from Saigon; I practised loading a gun while two moons hung over me and I waited for instructions to murder a paedophile; I tried to work out who killed an obese man by hanging him in a tree in the midwinter frozen tundra of Sweden; and; I headed off back to Vietnam on a secret mission to discover yet another murderer, a lieutenant who had killed a sargeant, witnessed by a Vietnamese national thirty years ago, and only just discovered in a souvenired letter an American soldier had finally sent back to be returned to its family. I know, that is a lot of crime solving. And quite a bit of violence. But there are classics in there. It's not all trashy holiday reading. 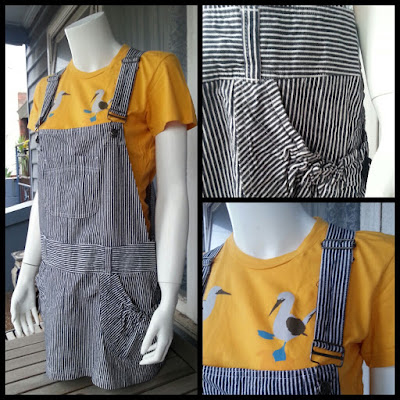 Why do they play 'The Girl From Ipanema' in every resort? Is it the quintessential exotic location ballad? What do you think is the most evocative holiday song? This one was playing as we again came head-to-head in the great battle for billiards mastership. V—— has asked me to not tell anyone that I beat him four to one. Don't say anything. And I think I was unlucky on the last game because I ended up with a blister from the sticky cue against my sticky hands in the stickyness of the bar. But I honestly think that he is too invested in winning, rather than my approach which was described as a 'depraved indifference to slaughtering my opponent', or as I like to call it, partly luck and partly maths. 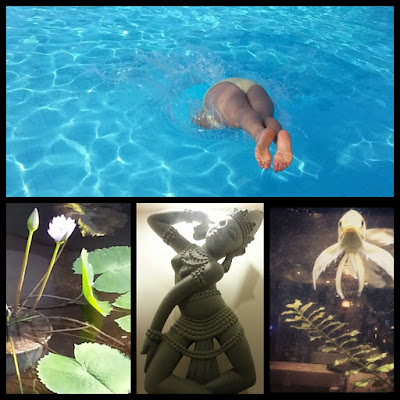 Irene's Outfit
T-shirt: Threadless (They are a great t-shirt shop, online, with a great story. Check them out. This one is called 'Nice Boobies' which has both fabulous birds and a dad-joke like pun! Perfect)
Overalls/Dress: Op-shopped

List_Addict's Outfit and Distractions
Bathers: Siren's Swimwear
Photos (clockwise from top): Me getting into the pool of the Golden Sand Resort, Hoi An; a very anxious and funny faced fish at the Sands White Orchid Restaurant (maybe there is one of those tanks next to him where fish are one minute swimming around all distracted and fishy, and the next minute on a plate; Cham sculpture; Lotus flower (beauty from muck)