I would imagine that many who visit Saigon's War Remnants Museum would say that there is another side to the story that isn't being told within those walls. It would be true. But it doesn't change the wrongs that have happened to this country in the the name of democracy. I must be a simpleton. I cannot understand how a country can have as fundamental to their being the right to choose any form of belief, to have freedom of speech, to be equal under God regardless, just regardless, but then not be able to choose Communism as their political guide. Don't get me wrong. I am not advocating this as my choice (even though I do believe in a former life I inhabited Socialist Russia—it's a hunch to do with tea in glasses and a love of the sound of the Russian language). But I don't understand the right to choose any belief except for ones that your Government is ignorantly afraid of, paranoid to the extreme by all evidences. I have no answers and so I don't feel I can judge. I have no idea what I would suggest if placed in a similar situation to the powers who needed to decide what to do with regards to Vietnam in the mid sixties. Or any conflict since. Is intervention in the name of what is seen as violation of human rights a new type of colonialism? Woah! Can of worms. But surely nothing at all can justify the use of chemical and biological weapons or nuclear weapons. What we end up with is citizenry who suffer as victims and perceived perpetrators for decisions made by a select few. Tears flowed when I visited Ground Zero as they did today. A human body is so fragile a mass of blood and bone and flesh, so easily torn and ripped. Call me simple again, but there are surely other ways to make resolution than what I saw today. Nothing is important enough to make that sort of suffering viable. Rant over. 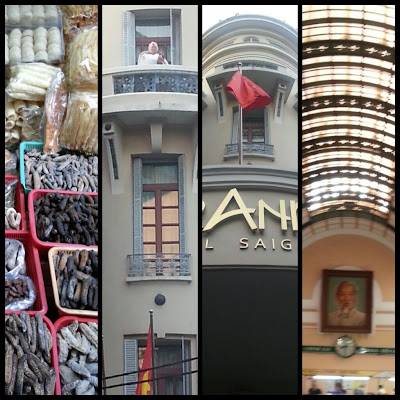 Big, big day. City tour, Cu Chi Tunnels. Remnants Museum and Reunification Palace. Chinese wholesale markets (which were an odd place to be: everything is sold in bulk; they don't see us as clients and so there is no hassle). Had lunch at the equivalent of Macdonald's, Pho 24, and dinner in the apparently upmarket Vietnamese House and it was neck and neck as to which was better fare. At the latter we thought we would go light and order a group of entrees to share. Oh my lord. They were divine: prawn stuffed pumpkin flowers and Vietnamese pancake, chargrilled beef stuffed with onions and garlic, chicken satay and spring rolls. I felt like I had eaten a truck. All in all the day was an overload of amazingness and sent me over the edge of stimulation! To migrainville :( 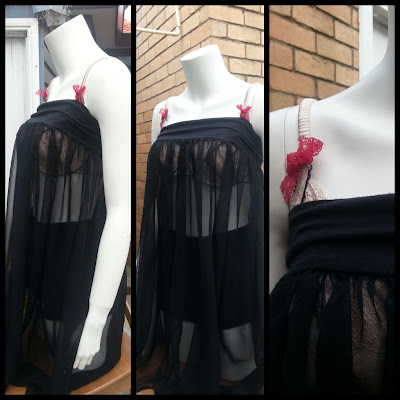 Irene's Outfit
Dress: From a skirt, Op-shopped
Bra: Elle MacPherson, way too big for Irene
Hotpants: No idea!
List_Addict's Outfit and Distractions
Top/Dress (very short): Op-shopped
Photos (from left): All things fishy from the wholesale market, there are sea cucumbers, dried scallops, sea horses, fish bubbles?, anything you can and couldn't possibly think of; my shoot, that is me on the balcony of our room, Wesley also pictured; the front of the Grand Hotel, Saigon; Saigon Post Office with portrait of Ho Ch Minh