Do you like a coloured front door? Bright and contrasting with the rest of the property. Glossy enamel, hard and shiny. It seems to me quintessentially English. Ten Downing Street. I believe I was born to be stylistically British. Oh, except like the stylishly stylistic British, not the ones you see on either Snog, Marry, Avoid, or, Embarrassing Bodies. I envisage a meeting between punk and stone Cornwallian cottage. It seems, when you see them, that lots of amazing British homes have this honest opulence about them. As if, unlike more minimalistic design, they display their hearts. B—— read an opinion which stated that much of the interior design we see around is aimed at re-sale—people decorate and live clutterless lives on the premise that they may, at any given moment, have to show their property for sale. We aim for the banality of magazine covers, Pinterest pins or hotel rooms. We manufacture a distance and a non-attachment to 'stuff'. Don't get me wrong. I am not advocating that other television milestone, Hoarders, but bring back a bit of personality I say. Although, it is probably like everything else aesthetic in this modern era: we think ours is the only place filled with memories and pieces and can't-do-withouts. But we harshly judge ourselves in comparison to an imagined 'other' that is filtered through what we see in media. We imagine other people's homes as Vogue spreads, but they more than likely look as chaotic as ours. If that was the case though, why would people get a little (or bigger than little) shock when they come into our lovingly ecclectic home? Personally I find our interior charming, even if a little bit of a dust-nightmare! 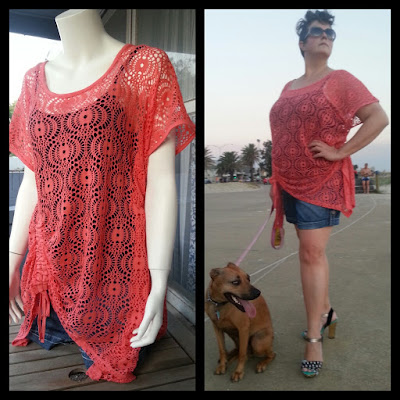 Irene               List_Addict
My non-coloured and non-shiny, even non-enamelled, front door is open tonight in the deluded hope of a breeze. On the air is the smell of smoke, and if I were to look north-west I would possibly see the glow of the fires that came so close today. My thoughts for those helping and struggling with those. In another example of establishing distance, the word 'bush' in bush fire always seems to make them feel more removed. It is a rude reminder of reality to have the latest fires jumping through what is essentially suburbia and not that mythical other-place, the 'bush'. Hopefully the change of wind does good in the next few hours rather than bad. Value everthing that you have that is immaterial. It is your only guarantee. 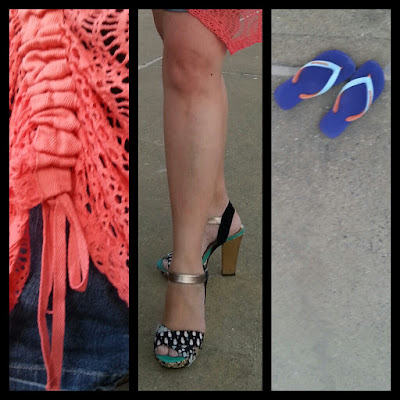 The Outfit
Top: Op-shopped
Singlet: Traget
Denim Shorts: Target
Shoes: Irregular Choice 'Whoopi' (The thongs/flip-flops are there to prove that I don't saunter out to shoots far from home in my ridiculous heels even though I should be practising despite possible permanent leg damage)
Photographer de Jour: B——

Who wore it better? Getting linky today with: