Last minute decision over a very late breakfast: Let's take Lollii down to Fairhaven for a run. No better way to combat the warmness than with a sea breeze. It is always four or five degrees cooler down there. She was insatiable. And what a good surfer. She leapt over waves on the way in and used them to ride back out. Clever girl. But it's that fine line. No, the other one. Where you know it is probably too much but she keeps bringing the ball back and dropping it at your feet. We were having some dinner outside a cafe in Anglesea. They had doggy bowls full of water. I got her some dog food and V—— gave her a bit of his flathead. She started drinking and drinking and drinking. It seemed a lot. I figured she was salty-watered out. Then, in front of everyone at the cafe she threw up all the water, the dog food and the flathead. Ah. Awkward. 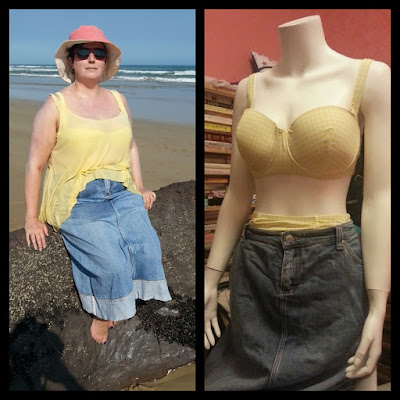 List_Addict               Irene
But she is all good now. Full return of appetite if the hot breathing and drooling on me while I have been snacking is anything to go by. I think she will sleep for a week. And there is a little part of me that preferred scooping up lumps from a sidewalk over doing the same from the back of V——'s car. It was funny though, she threw up just after a barrage of abuse an inebriated man who had been admiring her gave me when he found out what her name was. Dare to question the name Lollipop do you? Smite you down with vomit unbeliever! It was a handy way to get out of that conversation. 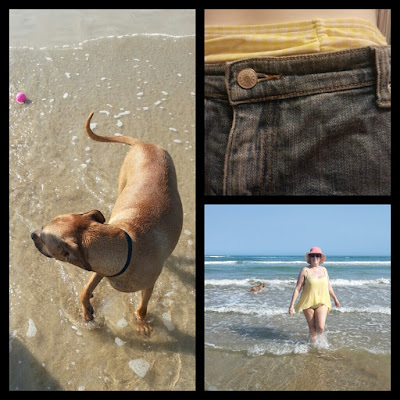 The Outfit
Bikini: Siren's Swimwear
Top: retail, and put into the wet clothing pile and left in V——'s car so that Irene wasn't then able to wear it (just means she gets to show off the bikini better, even if she is not chesty enough to fill it)
Skirt: Op-shopped
Photographer de Jour: V——