It is a blessing to have rain right here where I am, but not in much of the state or the country. This part of the year seems increasingly to be bringing disaster. I don't know if it is 'cyclic' but it certainly does appear to be getting worse. We're in cuckoo-land if we deny that human involvement isn't a factor. But I get a little tired of it always falling to the individual to make a difference. We are barraged with guilt-inducing ways in which our daily habits debilitate the planet. Yes, they do. We use too much energy and fuel and non-renewable resources, we purchase things that are over-produced and over-packaged and cheap. But it seems to me that no-one ever holds big-business as accountable in all this. We are enticed to be consumers because consuming keeps big-business in business. In a way the solution is for things to be more expensive. People would buy less. Companies would produce less and therefore emissions would be lower. But then they would need fewer employees, and the unemployed would have to buy things for more with no wages. That doesn't work. We've dug a hole I am not sure anyone knows how to get out of. Packaging is the same. Why couldn't we go back to big tubs of items that you fill yourself. It works for some items. Why couldn't we do it for sugar and flour and cereal and washing detergent? But there go factories and factories of people who make packaging products, and a whole bunch more people who fill tiny packets of things into larger packets, and then more people who put those in boxes. Maybe the damn guilt-producers and Gandhi are both right. You, the one and only little, individual, you, have to be the change you want to see after all. Buy local, spend more on quality rather than quantity (op-shopping excluded). I don't think it will make a hell of a lot of a difference, but it would be right to do. I just don't want some sanctamonious corporation telling me I have to when there are way bigger fish they could go after. Mini rant from nowhere, over and out! 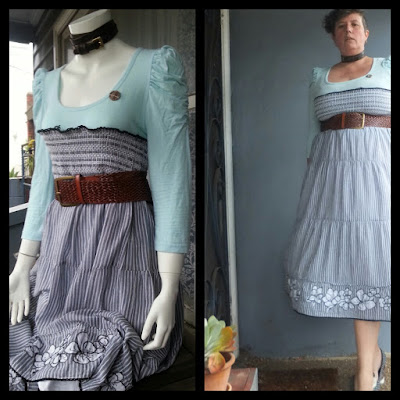 Irene               List_Addict
When I sat down to write I planned to say it had already been a month since this blog began. But I felt bad boasting about not repeating a single outfit item, when so many people are having a really bad time with all this fire and flooding (like those two should be happening simultaneously). I feel guilty for my consumerism. I feel guilty for my upcoming holiday. But then I get mad because I feel guilty when really, in the scheme of things, I am small fry. I don't drive, I don't always even use public transport. I op-shop most of my clothing—shoes and underwear are my main exceptions. I recycle, I turn off lights and I usually freeze in winter rather than popping on the portable heater, and boil in summer rather than getting air conditioning and our water consumption per person is below the benchmark. But still I feel guilty, and it is because we are made to feel that way. And I don't think Ford or Nike or Apple are. My opinion, of course. By the way, I also started off planning to say thank you to all of you for listening to my rants for the last month, and for visiting. In one month I have surpassed the number of visits that the whole of last year's blog had and I have only you to thank!! I hope you stay around. Xxx 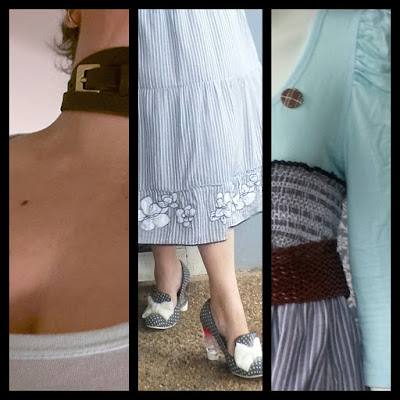 The Outfit
Dress: Op-shopped
Top: retail and cheap (I am evil!)
Belts: Retail (see)
Badge: Handmade in B—— and my badge-making sweatshop
Shoes: Irregular Choice 'Bowtiful' (they're Vegan if that helps?)