Wear 13: Raisins are Not Right - Especially When You Cook Them

Is food too fancy now? For lunch I had duck confit (had to ask what 'confit' meant; obviously not concentrating properly during episodes of Masterchef) with a tomato, pear, mint and Persian feta salad. Erh? How long has Persia been out of action? Like, seventy-seven years? How can they still be making feta? Just call it Iranian for goodness sake. It also came with a tangine sauce. Urm? A tangine is what you make the sauce in. Its like making a white sauce, as I sometimes do, and calling it 'the little pot with the too-thin bottom sauce'. And it doesn't tell you what ingredients are used. It had raisins. Raisins are all wrong (as Benny and Joon say: 'They had their lives stolen ... really, they're just humiliated grapes'), just like peanut butter is all wrong. The tomatoes and the pears were extemely finely sliced and piled up with a couple of sprigs of mint, some Iranian feta and a slow cooked duck leg with some raisin-and-purple-stuff sauce, cooked in a tangine, popped on top. And just to make it a little unusual, and not your normal Duck confit salad, they called it Morrocan(?) and used green tomatoes. But it was very nice, despite the humiliated grapes; just too try-hard. It's not like we were at some high-rent space in Docklands. This was the Pelican Pantry in Hastings. Although, for such a fancy meal, it was, I must say, very well priced. And, without embarrasment, I had an (adult) lime milkshake to accompany it. Adult? But no alcohol? Not sure how that works? 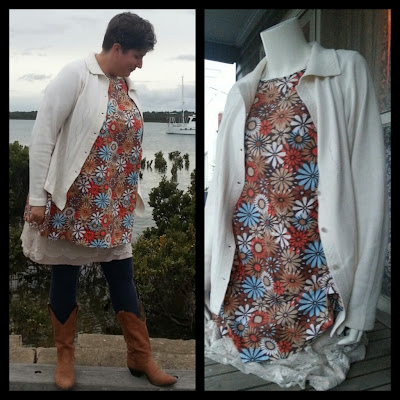 List_Addict               Irene
Sometimes I think I may over-analyse things. I'll have to tell you some of my observations on advertising one of these days. You'll be riveted I am sure! 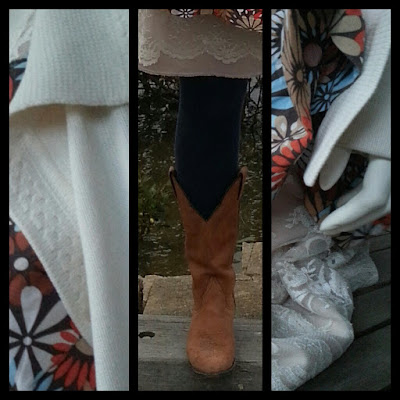 The Outfit
Top Dress: Handsewn by me for The Second Installment of my Land's End to John O'Groats walk
Bottom Dress (lace): op-shopped
Cardigan: op-shopped
Tights: Target
Boots: Upcycled from a real Texas pair by Sportsgirl