Day 19: With a Little Understanding, You Can Find the Perfect Blend

That growl is in the direction of the neighbours. In the direction of our tree that their build has destroyed and they refuse to pay for. In the direction of the blocked rear access that, if something terrible happened and we couldn't get out the front, would mean that we were trapped, but that they don't care about. In the direction of the three story wall going up where we had blue sky (but which is also a relief, in a way, because now the world can't look into our privacy from the lanes, and the yelling of contractors and the buzz of their radio is slightly muffled at their six-forty five starts). What we want to say to all the people involved with that site is this: If the people living in our house were your sisters or mothers or girlfriends, would you be acting this same disrespectful way? Or how would you feel about tradesmen who did the same? Stay tuned to this situation because I figure if it gets too bad then I will have to start naming names and shaming shames. That is what social media should be for, isn't it? 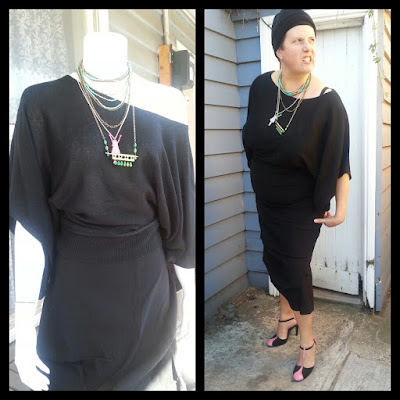 Irene               List_Addict
Just explaining my ridiculous hat. It is inspired by The Sartorialist. Scott, to the pleasure of some and the chagrin of others, has been posting lots of gals in silly hats on the streets of Paris and Milan. Why not Port Melbourne? 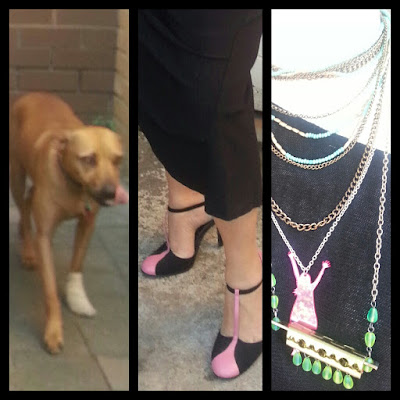 The Outfit
Top: Op-shopped
Skirt: Retail, probably Myers or similar
Necklaces: Op-shopped, cheap jewellery shopped and one that was the second ever thing I have won from the wonderful reycling and reusing blog Mich L in L.A.
Shoes: Dianna Ferrari sample store (and today they fell apart; I'll have to put that shoe-making course into practise now and fix them up!)